Geoff’s blog: EO in the News or a (satellite) image is worth a thousand words 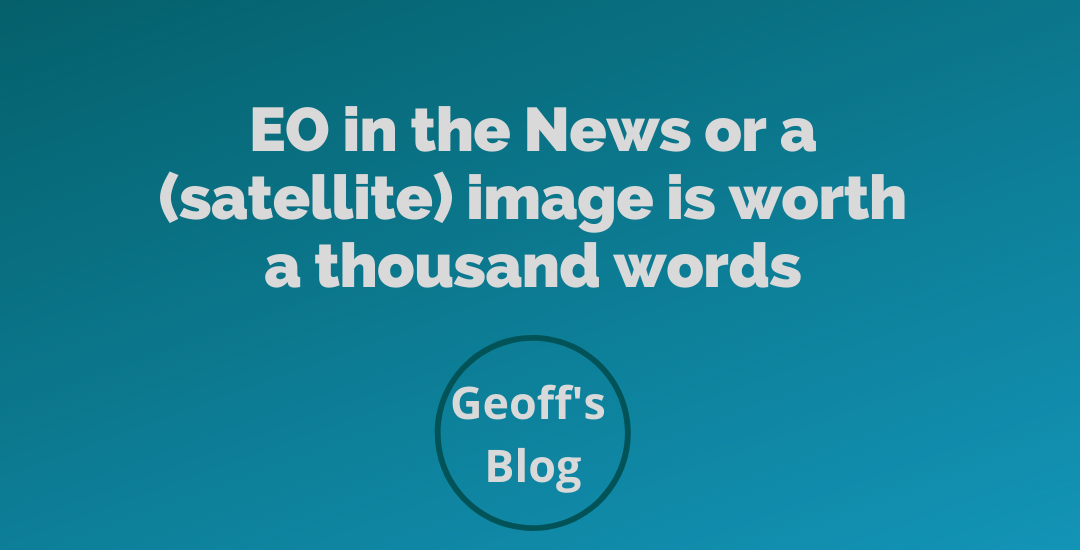 How can we help the media get better use of EO in its progressive use? This was the main question raised by Geoff while opening this EO Cafe. Since the launch of Landsat (1972) followed by SPOT (1986), EO has been used as a tool by journalists to show the readers of the days’ newspapers i.e. the main-stream media (MSM), images of the Earth to illustrate their stories. Never seen before, these images were highly educative and certainly led to a much greater awareness of geography and local news amongst the wider population. However at the time, these tools were costly depending on the resolution and provider.

Today, on the other hand the offer has changed. Public and commercial EO satellites offer free access to images as a way to promote their capabilities, making satellite imagery accessible to journalists. For example, Twitter recently featured satellite images of the EverGiven container ship stuck in the Suez canal using several types of imagery and providers. EO imagery is now often used by journalists to provide depth to the story by illustrating it and enhancing interest worldwide whilst providing to readers new perspectives, illustrating events or showcasing remote areas.

Each of the main (optical) satellite operators has a media office that works closely with news outlets to on the one hand support the storytelling and on the other to promote their capabilities – as well as developing a philanthropic image. Hence the mix of promotional commercial imagery and free public data coming from ESA, NASA, ISRO and other agencies, supported in some cases by extensive analytic capacity is keeping news sources satisfied. Important to say also that today a lot of the focus has moved away from the MSM onto social media – even for the traditional publishers. The digital version has become the reference even if a paper version is still published. Added to this we have social media that also act as new online media channels like Twitter, Facebook, Instagram, etc.

According to Jonathan Tirone, News Editor from Bloomberg, who was a guest in our recent EOcafe, EO imagery is bringing a new language to the media as it becomes much more widely accepted in newsrooms. Jonathan gave a number of examples including that of the Gchine uranium mine in Iran. This had been the subject of some detailed analysis showing how Iran had reopened the mine contrary to international agreements and, more particularly, had built facilities to process the ore. He observed also that Google Earth had played a strong role in warming up the news editors due to its easy access offer to satellite imagery with enough resolution. This is the case of the Copernicus Climate Change Service, which Jonathan mentioned, which has revolutionized the open-source platforms on coverage of climate change in Europe due to its free access. Nowadays the access to data is not an issue as before but Jonathan stressed out expertise is needed for an accurate interpretation and give the image an accurate context while doing the storytelling.

It is precisely this need that Jonathan notes it has originated a need in remote sensing analysts describing it as a “discrete“ industry in the bloom that has awakened the investors‘ interest. Another trend he pointed out was the need for the use of new technologies, such as big data tools for reporting as well as AI analytics. Most likely the next generation journalists will know how to combine techniques of writing, video production and use of technology as tools to enrich the newsrooms.

In addition, the immediacy of news reporting today is fuelling demand for instant reactivity from image providers as Remco Timmermans (#timmermansr) mentioned, who was our other guest in this EOcafe, and who, in 2020 was designated the #EUInfluencer for space. Remco presented the use of EO in the media from another angle. The use of EO for examining the veracity of reporting events. He called this “investigative journalism“ where journalists take in situ images from social media and prove its veracity by comparing them with satellite images for this fact-checking. As an example, he talked about the case of the Syrian war reported by Bellingcat “spaceproofing” what occurs on the ground.

Remco illustrated this with the examples from the EverGiven and the succession of images from each operator appearing on Twitter. These gave a fantastic opportunity to compare the images and not just those from optical satellite! After Sentinel-2, which set the scene, we had images from Planet, from Maxar (GeoEye) and from Airbus (Pleiades) showing in increasing detail the stuck ship and the efforts to release it. Maxar had the chance to have a satellite within range at the time the ship was freed demonstrating the advantages in having constellations and multiple imaging opportunities.

Both Iceye and Capella space released radar (SAR) images of the ship taken at night to illustrate the advantage that radar offers. These also illustrated the different features which radar highlights and hence the need for expert interpretation. For example, the foreshortening effect caused by the different image properties needs to be well understood – but then can be very useful and provide completely different information.

Does the industry support the news in this reporting effort? Jonathan mentioned that EO sometimes is a fairly tight community with limited possibility to bring expertise to interpret data for news purposes. On the other hand, Remco proposes a solution to this need of technical skills by mentioning imagery platforms such as the Sentinel Hubs make available processed imagery that could facilitate its distribution. This raises the question if whether in the future, this should be part of journalistic training. However, indeed these portals are not necessarily intended for journalism purposes as pointed by Remco. On the other hand, the friendliness or usage of platforms still remains subjective and even debatable, what it is not is the possibility of journalists to seek EO specialists and more continuity in satellite imagery supply.

Remco also provided a list of some of the more important influencers on the subject of EO, several of whom were in the audience. Geoff Smith (#DrGeoffSmith) one of the influencers identified by Remco, asked if information products or an optical image was better? The answer was it depends on the scope of the work but most importantly on the targeted audience. Whereas a remote sensing specialist would like more detailed technical information for decision making, an optical image will be better for a general audience visiting social media. Remco mentions this as “humanizing data” to civil society, in general, is the best option to showcase the benefits and opportunities of EO.

Stephane Ourevitch (#ourevitch_stp), and who is very active on Twitter behind the DG-DEFIS (#defis_eu) account, considers that the tools are out there which journalists can use. With no background in remote sensing, Stephane finds the Sentinel Hub (#sentinel_hub) a relatively easy tool to use to gather images to support stories. This led to further discussion concerning the training of journalists or support from the EO services sector. Remco also identified Pierre Markuse (#Pierre_Markuse) author of a useful guide for journalists[1] and Ground Station Space (# Dot_Space) which he supports as good, reliable resources.

This information brought by journalists also faces the issue of “fake news”. Dietrich Hans who was part of the audience raised this pertinent topic by presenting the possibility of a satellite image being misused to create misinformation. Jonathan shed some light by commenting the more sensitive the story or topic is a higher level of analysis is needed. Indeed, depending on the topic, further investigation is needed and crucial, rather than just using satellite imagery as the main evidence, such as the case of the Iraq war in 2002 used as main proof by the US and remains debatable. However, this further investigation remains a pillar for journalists, where, in this case, satellite analysis must be supported by other sources to be used as a reliable source of information.

The intervention of our guests showed us the two sides of how EO can be used in the newsroom, either as an illustration and scene setter with the image attached to the story or in the form of investigative journalism. Whether a need to set up a mechanism to have access to a remote sensing specialist remains a question that possibly in the future needs to be addressed to assist the journalist sector in their uptake of EO to be used in an ethical and responsible way.

Pierre Markuse “Satellite Image Guide for Journalists and Media” provides an overview and some tips on how to use/create satellite images for media.

[1] Pierre Markuse “Satellite Image Guide for Journalists and Media” provides an overview and some tips on how to use/create satellite images for media.