The beginning of Negotiations of the next EU budget 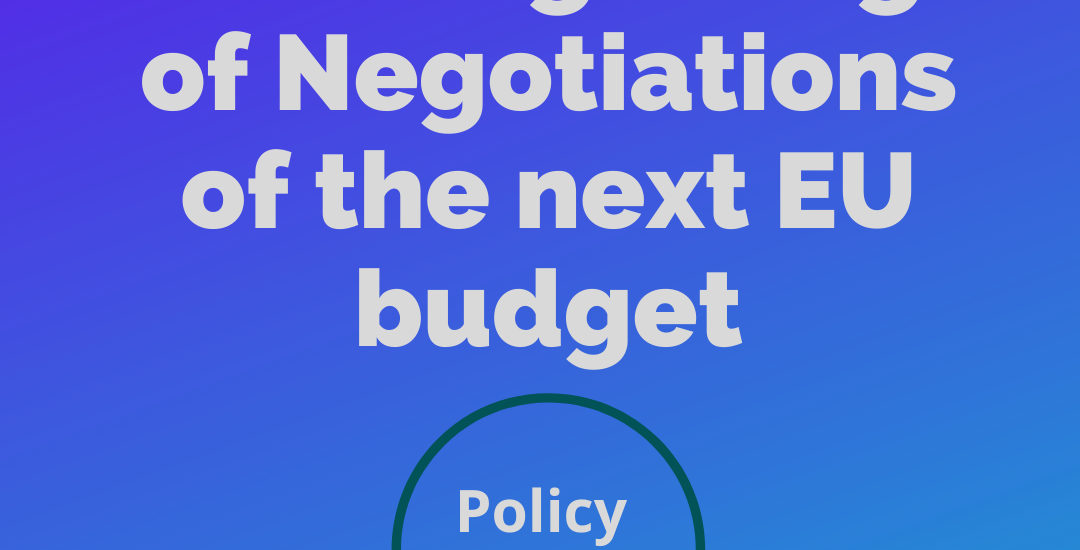 When will the Council, the Parliament and the Commission reach an agreement for the EU’s budget? What will be the consequences of the future negotiations?

Now that the trilateral discussions officially started, these questions are crucial for the future of the EU’s flagship programmes and the Recovery fund. Negotiators are racing against the clock, as they would like to have an agreement by the end of the year…

Before the Council can formally adopt the MFF (Multiannual Financial Framework) regulation, the EU Parliament must give its consent. In July, the EU Parliament adopted a resolution on the conclusions of the extraordinary European Council meeting of 17-21 July 2020, setting out its negotiating mandate and priorities in view of reaching an agreement.

On Thursday 27th of August, the delegations from the European Council and the Parliament (budget committee) met for the first time for discussions on a political level, including the Commission. The most important topics to be discussed concern:  the “Own Resources” (the EU’s revenue), the Recovery Fund, the role of the budgetary authority and certain horizontal issues like, for example, climate. The discussions were reported to be “constructive” and “quite intensive”.

The importance of negotiations: a race against the clock

Even if there is a strong political will of reaching a “good” agreement, the second trilateral discussion of the 7th of September between the Commission, the Parliament and the German presidency showed some difficulties and obstacles. J. Van Overtveldt, budget committee chair, said that there is “still a significant gap to be bridged between the Parliament and Council positions”.

Now the negotiations will follow in the upcoming weeks, with another meeting by the end of September[1].

The future of the EU’s budget at stake:

The Parliament requested to “bolster the EU’s seven-year budget with around 110 million and legally binding commitments on the introduction of new levies to finance the 750 million of the Recovery Fund”[2]. One of the main difficulties with the negotiations is that the Parliament wants an increase in the budget to finance areas like the Erasmus education programme or Horizon Europe, the EU’s innovation and research programme. The focus about the EU’s “own resources” is also crucial because the Parliament wants to avoid any future cuts in the EU’s programmes.

It is certain that the room for manoeuvre is very limited on these aspects and the negotiations will be difficult.

The future of the EU Space programme:

These negotiations are important for the earth observation sector because of a potential impact on the EU Space programme.

The EU Space regulation setting out the Space programme is still under negotiation between the EU institutions. The key element is the budget, but it is also tied up with the position of the UK. The budget can only be resolved once the overall EU budget for the next Financial period has been agreed.

There is no precise figure on the table yet concerning the Space programme but we will follow closely the discussions and keep you updated as negotiations progress!

[1] On the 28.09.2020, the Budgetary Control Committee will hold an exchange of views on the opinion to ECON/BUDG on establishing a Recovery and Resilience Facility.