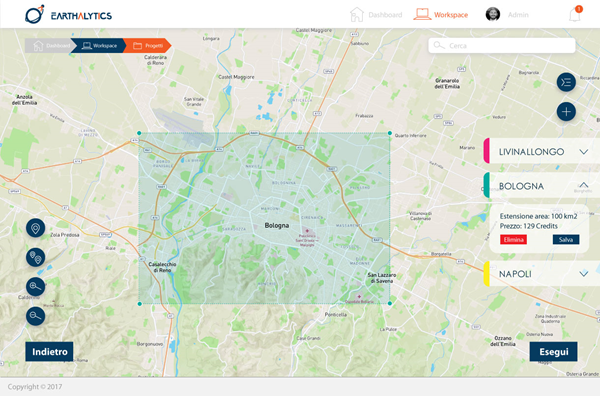 Petabytes of satellite imagery have become accessible at increasing resolution and lower cost, but despite these enormous technological advances, only a marginal part of the information contained in these images is actually used to support business processes, monitoring and prevention activities.

Latitudo 40’s founders have been working in the space economy sector for several years, both in the marketing & business development area and the image analysis / R&D area and the idea behind Latitudo 40 derives from the awareness that extracting information from satellite images is a complex process that requires a dedicated organization, which only large companies can afford.

Latitudo 40 wants to bring earth analytics within the reach of everyone, especially small and medium-sized enterprises. This vision has turned into the startup that is launching an end-to-end cloud platform that can build and manage an application to perform geospatial analytics in four steps and integrate the results into any existing application, such as SAP or a GIS.

The UIX has gone through many months of analysis and user-tests in order to reach what it is now: a user-friendly web application where users just need to select an area of interest, describe which kind of analysis they need on that area and a date range. Latitudo 40 will then engage a complex query on*almost every satellite image provider* on earth, apply artificial intelligence algorithms on the images and present an easy to understand set information on a map.

The revolutionary concept behind the platform is that each set of AI algorithm is called “brick”. The bricks can be composed in endless combinations creating ad-hoc geospatial applications, freely generated by users who canelvud the reuse these application on different geographical areas or different date ranges.

If the user works for a local municipality and is looking for urban planning information, he can select the buildings change detection brick, the pools classification brick and the green areas detector brick. At this point he can save this configuration as a new template or geospatial application and reuse as many times as he wants on different areas or dates.

Also, the algorithms which compose the building bricks are only partially developed by Latitudo 40, since many are developed by the data scientists community which benefits from the the platform using a pay-per-use business model.

Latitudo 40 has a short history, but has have already achieved important results. In 2017 the company has joined the European Space Agency’s incubation programme in the Business Incubator in Rome, the team has also won two local challenges on infrastructure monitoring with the use of artificial intelligence with E-geos and in 2019 has managed to conclude the first significant contract for monitoring activities for the national electricity grid. In the meantime Lastitudo 40 has concluded several commercial contracts with national customers and has started to collaborate with some international customers.

Many efforts were put in choosing the right team that would share the earth observation 2.0 paradigm. The approach to satellite imagery was usually traditional and we had to look for people with the right skills and the desire to take on a big challenge. In this process we were close to Image Processing Research Group of the University Federico II of Naples, that has great experience in image processing and important collaborations with DARPA.